I never cared much about politics, and then Farage rolled out his toxic campaign to take back control, or whatever the hell it was called. Like many a bubble-dwelling liberal elite snowflake I was dismayed. “The man is neither a scholar nor a gentleman” was the going joke down the pub.

Brexit shook me out of complacency.

Madam Prime Minister says we’re all Brexiters now and should stand together to defend the island from the big bad Everywhere – we’re all in the same boat, you understand. I find this notion ludicrous. Just because I admit that the waters around me have grown doesn’t mean that I’ll be going down to the galley and making tea for the dimwits busily hacking at the hull.

Regardless, there’s a wider question of what on earth has happened to the place formerly known as the First World. I’m not the only one who’s noticed, and it’s not an entirely recent phenomenon.

In 2002 my completely apolitical friend flew back to France in a hurry to vote for Jacques Chirac (“He’s a bad president, but I can’t allow my country to embarrass me more than it already has”) after Jean-Marie Le Pen came second in the first round of the presidential election. Fast forward fifteen years, and voilà! We have Trump, Brexit and there’s Le Pen fuckin’ junior running in the 2017 French general election.

Many have blamed the rise of populism in the West on wealth and income inequality, fiscal policies implemented in the aftermath of the 2008 financial crisis, and economic impacts of globalisation.

I’m sure the reasons are legion, but I don’t believe that the deciding factors in bringing this about have been economic. Here’s a paper written by a couple of researchers at Harvard Kennedy School that (surprise, surprise!) supports my view 😉

Back in the 70s the politically correct term for the Third World was “less developed countries”; at that time this included Brazil, Malaysia, China and India.

By the turn of the century the world’s economic landscape had changed. A lot of what used to be the Third World had industrialised, the end of the Cold War brought the former communist countries into the fold of the capitalist enterprise. It didn’t stop there: Indonesia, Vietnam and the Philippines are the new Asian Tigers; in the Middle East Iran looks promising.

While emerging markets surged ahead, economic growth in mature developed economies slowed. Ermine has written a comprehensive analysis 😉 of what that has done to the perceived living standards of Torygraph’s readers. Yet there are two reasons I find the claims that Those Left Behind are being driven towards populism by economic disadvantage problematic. First, I wouldn’t exactly call the Torygraph demographic “those left behind”. And second, a slower growth does not an economic contraction maketh.

Although comparatively globalisation made a more significant difference to living standards in poor countries – they started from a lower base – in absolute terms we have all become richer. The UK’s median household inflation-adjusted disposable incomes have increased over the past 40 years, and the overall percentage of people living in relative low income has fallen. 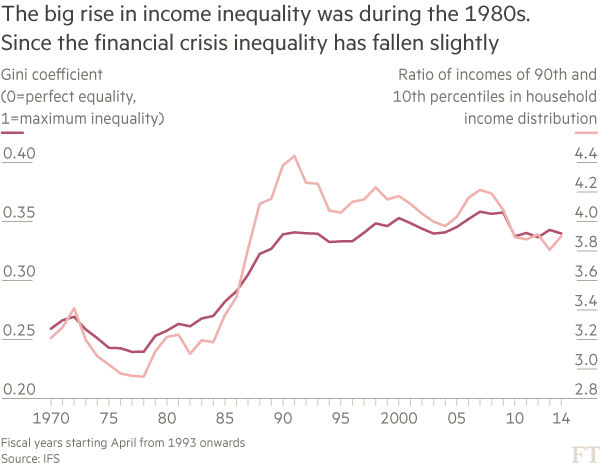 Average net household incomes grew by an average of 2.4 per cent a year between 1961 and 2000. Between the turn of the century and the start of the financial crisis, growth was somewhat slower, at 1.9 per cent a year on average. (Source: FT)

It’s not the economy, stupid

The truth is, neither the US election not the Brexit referendum were won on the economic argument. Experts shmeksperts and all that.

Many areas of Wales that voted in favour of leaving the EU are in fact net recipients of funds from the EU. In 2014 Welsh taxpayers contributed £414 million to the EU but received £658 million in funding; that’s a net benefit to Wales of around £79 per head. Some have called this a textbook definition of self harm. I call this evidence that the motivations which moved the populus to vote with BoJo and Farage had nothing to do with financial interests[1].

So what if Trump’s “amazing infrastructure projects and massive tax cuts, the best tax cuts ever” budget doesn’t stack up. So what if the new president’s priorities having taken office have more to do with allowing oil companies dump sludge in the river and repealing Dodd-Frank than improving the lot of an average white working class Joe. It doesn’t matter. Joe didn’t vote for an economic plan, he voted for bringing back “the old days” when he was THE demographic which held political and economic power.

Inglehart and Norris, who wrote the paper I reference above, argue that the rise of populism has been caused by a cultural backlash rather than an economic shift.

They claim that advancement liberal and cosmopolitan values in Western societies has brought emphasis on issues like environment, gender and racial equality, same-sex marriage, tolerance of social and cultural diversity, secular habits and ethics. While this has increased tolerance of lifestyles, religions and cultures that are different from our own, it has also caused a backlash among less educated and older people, who feel threatened by this change. Those who were once the privileged majority culture resent being told that their traditional values are ‘politically incorrect’ and feel that they are being marginalized within their own countries.

This is significant, because if true, this means that the cultural divide will likely continue to feed populism in the future, irrespective of any improvements in the economic conditions or slowdown in globalisation. Panem et circenses may be their battle cry, but it is not bread they want. Not really.

This also means that there’s a significant difference between what I may think of this shitshow of a situation and what I can do about it. Except perhaps to try and arrange my tax affairs so as to finance it as little as possible. Bring on the end of the tax year, Geronimo.

5 thoughts on “What Is Happening to the World?”